July 2009 - On July 9 the start of the American Library Association Conference in Chicago took place. More than 25.000 librarians attended the conference in Chicago. Quite a lot of them, though not all, were in the audience when Scholastic Publishers held its panel, Mixing it up, on Saturday 11th. It was excellently moderated by Marianne Martens, and it focused on the challenges of publishing Heartsinger in America. It featured Laura Watkinson, who made a wonderful translation of Heartsinger, and furthermore Cheryl Klein and Arthur Levine from Scholastics. And me. Panel and discussion afterwards were vivid and very interesting. In the afternoon Laura and I put our signatures in some two hundred copies of our book.

On Sunday we read during the Scholastic Literary brunch, and we were happy to see that people actually stopped chewing while listening to the opening lines of the chapter Sailors sweetheart, read first by me in Dutch and then by Laura in English. Other readers were Sharon Robinson, Mark Teague, Maggie Stiefvater and many more.

I left Chicago with a song in my heart.

January 2009 - Heartsinger (Dutch title Koningsdochter, zeemanslief, 2005) has been published by Arthur A. Levine Books (New York). Laura Watkinson has taken superb care of the translation.
It is the first of my books to make it across the ocean, so I'm pretty proud! The first reviews are there too and they are quite positive: Kirkus Reviews: Stoffels’s fresh Dutch voice, rendered fluidly and beautifully in Watkinson’s translation, weaves together traditional folktale elements to create an original, haunting story of love that is magical unto itself. Heartfelt through and through. Teens read too: Heartsinger is one of those rare books that doesn’t fit the mold of one genre. Flowing more like a fairy tale, Ms. Stoffels creates a story that weaves multiple romances into one epic journey of Mee, the singer of sorrows. [...] Heartsinger is a moving tale of love and loss. The intertwined stories that help tell of Mee’s travels are touching and sweet.

2008 - As a child, I was a big fan of Enid Blyton and her The Famous Five books. Inspired by those books, I'm now working on a series of thrilling adventure stories featuring the Black Dog Gang, four children and their dog. The first two have been published this year: Het geheim van het gestolen grafbeeld (The Secret of the Stolen Tomb Statue) and De verdwenen diamanten (The Diamonds that Disappeared). A third one is expected for in the summer of 2009.

November 2007 - Jos Huikeshoven painted my portrait for the Letterkundig Museum (Literature Museum) in The Hague.

February 2007 - Marokko am See, the German translation of Marokko aan de plas (Morocco by the Lake), awarded the Lesepeter, the monthly prize given by the Children's Literature and Media workgroup of GEW, the German education and science trades union. It was published last year by Beltz. In November, Focus a German radio programme included it on their list of the seven best books for young readers.

December 2006 - Foead en de vliegende badmat (Fouad and the Flying Bathmat) won the Jenny Smelik-IBBY prize 2006. This is a biennial prize (till 1990 the Jenny Smelik-Kiggen prize) for authors and illustrators of children's and youth literature who contribute to the achievement of a better understanding of people from minority cultures. The prize is awarded by the Dutch section of IBBY (International Board on Books for Young People). The jury praised the writer for her humour and the way she unobtrusively blended multicultural issues into a story for children.

October 2006 - Several paragraphs to appear in the Standaard Boekhandel Agenda July 2007, in which I say why I'm a writer.

September 2006 - Annual prize for best children's book is awarded. Newspaper NRC Handelsblad (29 September) finds something incredible: 'A book of just 120 pages makes the biggest impression. In Koningsdochter, zeemanslief (Heartsinger) K. Stoffels has woven a marvellous tale out of language and music. About grief and solace, about death and above all about love. Love that can't be forced, selfless love, longed-for love, love that's expressed in a glance - even through a mirror. It's incredible that the jury have entirely ignored this book. Read it and Children's Book Week will have regained its meaning.' Not surprisingly the book was the paper's own choice for the prize.

April 2006 - Nergens bang voor (You can't scare me) Querido's summer book for 2006. Thirteen exciting tales (one of them mine) that you shouldn't read on your own in the dark. Especially if you're of a nervous disposition. 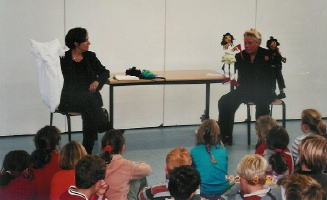 October 2005 - It was a great honour this month to be given the opportunity to write a column for Leesfeest. With my friend Nel I also visited a number of schools during Book Week. We put on a puppet show based on excerpts from Fouad. Most of the children enjoyed it, I think - I did anyway. 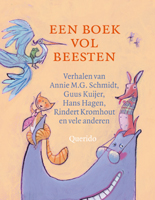 Querido's holiday book this year is called A Book of Beasts. If you want to know which story is by me you'll have to go to the bookshop and have a look.

July - 19 October 2005. 'New Dutch' Exhibition at the Literature Museum in The Hague. A selection of 14 (out of 100) literary debuts over the past ten years. I'm included - quite an honour. The idea of the Exhibition is to provide an insight into each author's mind by means of photos, objects, etc. What I'll contribute, I'm still not sure ...

May 2004. Another splendid Querido holiday book: Vakantie op Wadsoog (Holiday on Wadsoog). Stories by sixteen well known Dutch and Flemish authors of children's books, about children staying at a hotel. Two are by me.

May 2003- Summer in your head, Querido's holiday book, has stories by various Dutch and Flemish children's book authors. Mine is called Paramaribo.

May 2003 -Rattenvanger (Pied piper) and Khalid now published in Germany. The first was translated by Miriam Pressler and is titled Rattenfänger. The second by Rolf Erdorf and has the same title in German. Published by Beltz.

November 2002 -Long, Long Ago published by Lannoo. It contains the favourite fairy tales of well known Flemish and Dutch authors. My contribution is Wis and Ramin, an old Persian tale.

May 2002 - Mosie and Reizele published in Japanese as Moishe to Raizele. Translated from German by Atsuko.

February 2002 - Ramadan in Amsterdam, my contribution for the song contest at the Amsterdam Cabaret Festival is one of twelve texts selected by the jury.

November 2001 - Rottefaengeren is the Danish title of Pied Piper.

May 2001 - In Afrika by Hanneke vd Hoeven is published. Hanneke did the Christoffel animations on this site. In Afrika is published by In de Knipscheer.

April 2001. Pied Piper awarded the Zilveren Zoen 2001. Published in autumn 2000, it was nominated with four other books for the Gouden Zoen, the CPNB prize for the best book for youngsters over 12 years of age.